Climate change is forcing us to prepare for wetter winters, drier summers and more intense downpours in the coming decades. Much of the rain falls on through paved area (such as streets, squares, and roofs). So it is clear this will have a significant impact on the sewerage system. A study commissioned by Vlario (Wolfs et al., 2018) foresees that the frequency of flooding will increase by a factor of 8. In other words, flooding that occurs every 20 years in the current climate will occur every 4 years by 2050 and even every 2.5 years by 2100.

One of the measures being put forward is the massive expansion of buffering in the sewers, but it takes years for such projects to be realised and it also costs the community a lot of money. But there are other ways to address buffering. 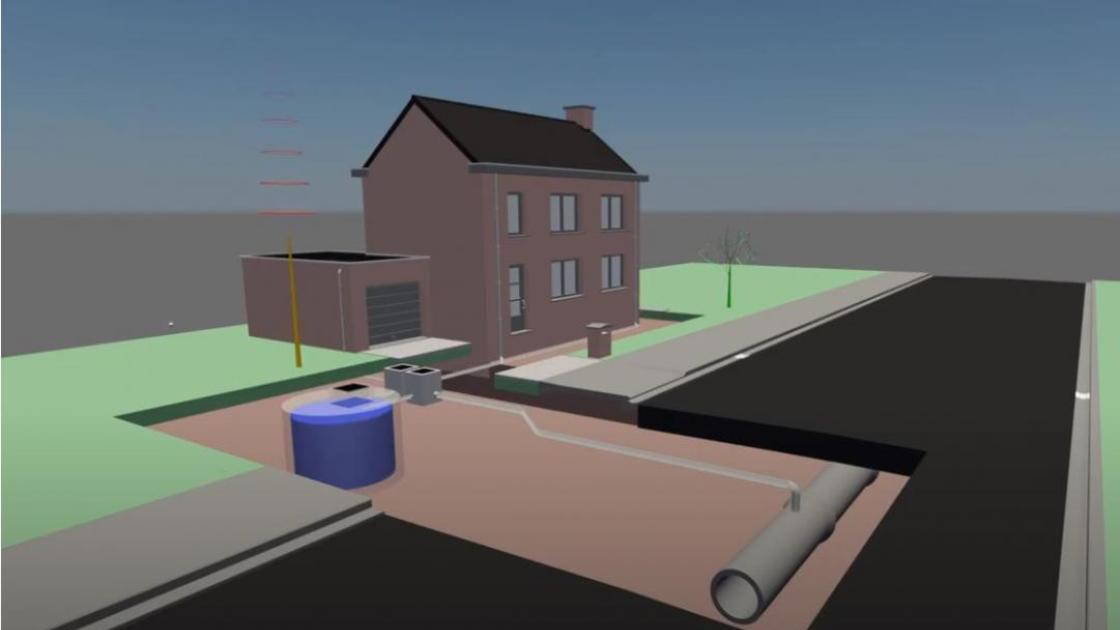 An estimated 60% of Flemish households have a rainwater well, but many do not or barely use them.. As a result, many wells are virtually full during the wet months. In effect, the available volume is not used or is underutilized as a buffer.

This issue can be addressed. The vertical axis of Figure 1 shows the volume of rainwater that flows from a rainwater well during rain showers for the current climate (blue), but also for the expected climate in 2050 (red) and 2100 (orange). On the horizontal axis is the return period in which this happens. To facilitate the interpretation of this graph (pink): in the current climate, one volume of 5 m³ will overflow from the rainwell every five years.

When expected overflow volumes are combined with information on the volume of the available rainwater wells (Figure 1), it can be concluded that in many cases an overflow of rainwater can be avoided or that its volume can be significantly  reduced.

With Aqtiput Aquafin wants to activate the rainwater wells, as it were, by sending overflows into the rainwater wells. In this way, heavy downpours can (partly) be absorbed and the sewers can drain the incoming rainwater more easily, resulting in less sewerage flooding and/or flooding.

To solve flooding, we generally turn to the (local) authorities. The unique thing about Aqtiput is that it works directly with the citizen to address a societal challenge in a faster and more cost-effective way. Obviously, not all rainwater wells in Flanders – their number is estimated at 1.6 million – are eligible. The aim is to address an existing problem (flooding and/or overflow). The modelling work to find out which rainwater wells to activate is an important part of the challenge and innovation.

Aqtiput is currently in full development and will be implemented into a demo project in the course of 2020.